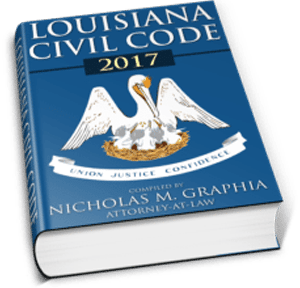 These changes are incorporated in our edition of the 2017 Louisiana Civil Code. Copies are available through www.GulfCoastLegalPublishing.com and Amazon.

Art. 189. Time limit for disavowal by the husband

The action for disavowal of paternity is subject to a liberative prescription of one year. This prescription commences to run from the day of the birth of the child, or the day the husband knew or should have known that he may not be the biological father of the child, whichever occurs later.

Nevertheless, if the husband lived separate and apart from the mother continuously during the three hundred days immediately preceding the birth of the child, this prescription does not commence to run until the husband is notified in writing that a party in interest has asserted that the husband is the father of the child.

Art. 191. Contestation and establishment of paternity by mother

SUBSECTION B. PRESUMPTION OF PATERNITY BY SUBSEQUENT

Art. 195. Presumption by marriage and acknowledgment; child not filiated to another man; proof; time period

A man who marries the mother of a child not filiated to another man and who, with the concurrence of the mother, acknowledges the child by authentic act is presumed to be the father of that child.

The husband may disavow paternity of the child as provided in Article 187. Revocation of the authentic act of acknowledgment alone is not sufficient to rebut the presumption of paternity created by this Article.

Art. 256. Children born outside of marriage

Art. 261. Child born outside of marriage

The father or mother who is entitled to the tutorship of the child born outside of marriage, according to the provisions of Article 256, can choose a tutor for him, whose appointment, to be valid, must be approved by the judge.

When a person above the age of fifteen possesses less than two-thirds of the intellectual functioning of a person of the same age with average intellectual functioning, evidenced by standard testing procedures administered by competent persons or other relevant evidence acceptable to the court, the parents of such person, or the person entitled to custody or tutorship if one or both parents are dead, incapacitated, or an absent person, or if the parents are judicially separated or divorced, may, with the concurrence of the coroner of the parish of the intellectually disabled person’s domicile, petition the court of that district to place such person under a continuing tutorship which shall not automatically end at any age but shall continue until revoked by the court of domicile. The petitioner shall not bear the coroner’s costs or fees associated with securing the coroner’s concurrence.

Any child conceived from the use of gametes donated by an individual shall not be deemed a forced heir of that individual, unless the individual would be an ascendant of first or second degree notwithstanding the donation of genetic material through an in vitro fertilization process.

A disposition inter vivos or mortis causa by which the usufruct is given to one person and the naked ownership to another is not a prohibited substitution.

The mandatary may perform all acts that are incidental to or necessary for the performance of the mandate.

A mandatary shall not prevent or limit reasonable communication, visitation, or interaction between a principal who is over the age of eighteen years and another person without prior court approval, to be granted only upon a showing of good cause by the mandatary, unless express authority has been provided pursuant to Article 2997(7).

Authority also must be given expressly to:

(1) Make an inter vivos donation, either outright or to a new or existing trust or other custodial arrangement, and, when also expressly so provided, to impose such conditions on the donation, including, without limitation, the power to revoke, that are not contrary to the other express terms of the mandate.

(2) Accept or renounce a succession.

(3) Contract a loan, acknowledge or make remission of a debt, or become a surety.

(5) Enter into a compromise or refer a matter to arbitration.

(7) Prevent or limit reasonable communication, visitation, or interaction between the principal and a relative by blood, adoption, or affinity within the third degree, or another individual who has a relationship based on or productive of strong affection.

If the effect of recordation of a mortgage, pledge, or privilege has ceased for lack of reinscription or has prescribed by lapse of time under R.S. 9:5685, the recorder upon receipt of a written signed application shall cancel its recordation.

Delictual actions which arise due to damages sustained as a result of an act defined as a crime of violence under Chapter 1 of Title 14 of the Louisiana Revised Statutes of 1950, except as provided in Article 3496.2, are subject to a liberative prescription of two years. This prescription commences to run from the day injury or damage is sustained.

Art. 3496.2. Action against a person for sexual assault

A delictual action against a person for any act of sexual assault, as defined in R.S. 46:2184, is subject to a liberative prescription of three years. This prescription commences to run from the day the injury or damage is sustained or the day the victim is notified of the identity of the offender by law enforcement or a judicial agency, whichever is later. This prescriptive period shall be subject to any exception of peremption provided by law.