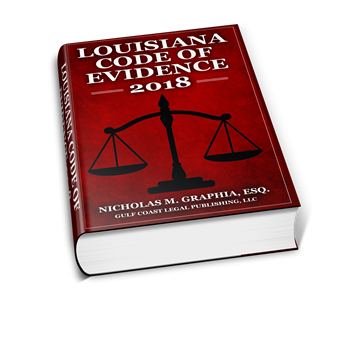 2017 Updates to the Louisiana Code of Evidence

In 2017, the Louisiana Legislature made changes to the Louisiana Code of Evidence. In particular. Article 412.4, parts A and D, as well as Article 902 were updated. The text of this legislation is copied below.

These changes are incorporated in our 2018 edition of the Louisiana Criminal Code. Copies are available here.

B. In a case in which the state intends to offer evidence under the provisions of this Article, the prosecution shall, upon request of the accused, provide reasonable notice in advance of trial of the nature of any such evidence it intends to introduce at trial for such purposes.

C. This Article shall not be construed to limit the admissibility or consideration of evidence under any other rule.

D. For purposes of this Article:

(1) “Abusive behavior” means any behavior of the offender involving the use or threatened use of force against the person or property of a family member, household member, or dating partner of the alleged offender.

(2) “Dating partner” means any person who is involved or has been involved in a sexual or intimate relationship with the offender characterized by the expectation of affectionate involvement independent of financial considerations, regardless of whether the person presently lives or formerly lived in the same residence with the offender. “Dating partner” shall not include a casual relationship or ordinary association between persons in a business or social context.

Extrinsic evidence of authenticity as a condition precedent to admissibility is not required with respect to the following:

(1)  Domestic public documents under seal.  A document bearing a seal, including electronically generated documents logically associated with electronically generated seals, purporting to be that of the United States, or of any state, district, commonwealth, territory, or insular possession thereof, or the Panama Canal Zone, or the Trust Territory of the Pacific Islands, or of a political subdivision, department, officer, or agency thereof, and a signature purporting to be an attestation or execution.

(2)  Domestic public documents not under seal.  (a) Domestic public documents generally.  A document purporting to bear the signature in his official capacity of an officer or employee of any entity included in Paragraph (1) hereof, having no seal, if a public officer having a seal and having official duties in the district or political subdivision of the officer or employee certifies under seal that the signer has the official capacity and that the signature is genuine.

(b)  Certified Louisiana public documents.  A purported record, book, paper, or other document of the State of Louisiana, or of a department, board, or agency thereof or of a political subdivision of the state or a department, board, or agency of such a subdivision when certified as being the original by an officer or employee who identifies his official position and who either has custody of the document or who is otherwise authorized to make such a certification.

(3)  Foreign public documents.  A document purporting to be executed or attested in his official capacity by a person authorized by the laws of a foreign country to make the execution or attestation, and accompanied by a final certification as to the genuineness of the signature and official position (a) of the executing or attesting person, or (b) of any foreign official whose certificate of genuineness of signature and official position relates to the execution or attestation or is in a chain of certificates of genuineness of signature and official position relating to the execution or attestation.  A final certification may be made by a secretary of embassy or legation, consul general, consul, vice consul, or consular agent of the United States, or a diplomatic or consular official of the foreign country assigned or accredited to the United States.  If reasonable opportunity has been given to all parties to investigate the authenticity and accuracy of official documents, the court may, for good cause shown, order that they be treated as presumptively authentic without final certification or permit them to be evidenced by an attested summary with or without final certification.

(5)  Official publications.  Books, pamphlets, or other publications purporting to be issued by public authority.

(7)  Trade inscriptions and the like.  Inscriptions, signs, tags, or labels purporting to have been affixed in the course of business and indicating ownership, control, or origin.

(8)  Authentic acts, acknowledged acts, and other instruments attested by witnesses.  (a) Authentic acts, acts under private signature duly acknowledged, and instruments attested by witnesses and accompanied by affidavits, as provided by Louisiana law, whether executed in Louisiana or elsewhere.  (b) Documents executed in a jurisdiction other than Louisiana accompanied by a certificate of acknowledgment executed in the manner provided by the laws of that jurisdiction by a notary public or other officer authorized by law to take acknowledgments.

(10)  Labor reports.  A copy of a report from the Louisiana Workforce Commission, or from any state or federal reporting agency, which is in the possession of a field officer of the support enforcement services program, office of children and family, Department of Children and Family Services, introduced as evidence in any child or spousal support proceeding.  “Field officer” means any person designated or authorized as a field officer pursuant to the provisions of R.S. 46:236.1.8.

(11) Certified records of a regularly conducted business activity in criminal cases. In criminal cases, the original or a copy of a record of a regularly conducted business activity that meets the requirements of Article 803(6), as shown by a certification of the custodian or another qualified person, and that complies with Louisiana law, including R.S. 13:3733 through 3733.2, or a rule prescribed by the Louisiana Supreme Court. Before the trial or hearing, the proponent shall give an adverse party reasonable written notice of the intent to offer the record and shall make the record and certification available for inspection so that the party has a fair opportunity to challenge it.