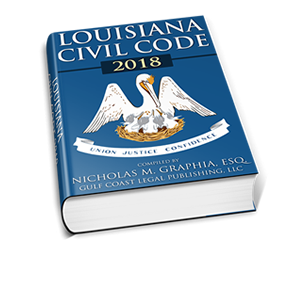 2017 Updates to the Louisiana Civil Code

These changes are incorporated in our 2018 edition of the Louisiana Civil Code. Copies are available here.

An estate situated below is the servient estate and is bound to receive the surface waters that flow naturally from a dominant estate situated above unless an act of man has created the flow.

Art. 656. Obligations of the owners

A community enterprise is a business that is not a juridical person.

A spouse has a duty to preserve and to manage prudently former community property under his control in a manner consistent with the mode of use of that property immediately prior to termination of the community regime. He is answerable for any damage caused by his fault, default, or neglect.

B. If a judgment has been rendered, in accordance with Article 2374(C) or (D), a reconciliation reestablishes the regime of community property between the spouses retroactively to the day of its termination, unless prior to the reconciliation the spouses execute a matrimonial agreement to the contrary. This agreement need not be approved by the court and is effective toward third persons when filed for registry in the manner provided by Article 2332. The reestablishment of the community is effective toward third persons when a notice thereof is filed for registry in the same manner.

A. An instrument shall contain the following information when appropriate for its type and nature:

(1) The full name, domicile, and permanent mailing address of the parties.

(2) The marital status of all of the parties who are individuals, including the full name of the present spouse or a declaration that the party is unmarried.

(3) A declaration as to whether there has been a change in the marital status of any party who is a transferor of the immovable or interest or right since he acquired it, and if so, when and in what manner the change occurred.

(4) The municipal number or postal address of the property, if it has one.

(5) The last four digits of the social security number or the taxpayer identification number of the mortgagor, whichever is applicable.

(6) The notary’s identification number or the attorney’s bar roll number and the typed, printed, or stamped name of the notary and witnesses if the instrument is an authentic act of, or an authenticated act by, a notary.

B. The recorder shall not refuse to record an instrument because it does not contain the information required by this Article. The omission of that information does not impair the validity of an instrument or the effect given to its recordation.

C. The recorder shall display only the last four digits of the social security numbers or taxpayer identification numbers listed on instruments that his office makes available for viewing on the internet.