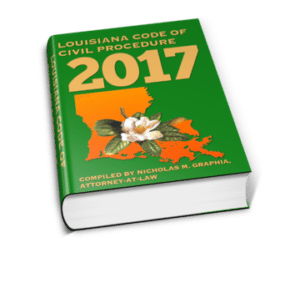 Art. 1467. Requests for admission; answers and objections
A. Each matter of which an admission is requested shall be separately set forth. The matter is admitted unless, within thirty days after service of the request, or within such shorter or longer time as the court may allow, the party to whom the request is directed serves upon the party requesting the admission a written answer or objection addressed to the matter, signed by the party or by his attorney. The written answer or reasons for objection to each request for admission shall immediately follow a restatement of the request for admission to which the answer or objection is responding. If objection is made, the reasons therefor shall be stated. The answer shall specifically deny the matter or set forth in detail the reasons why the answering party cannot truthfully admit or deny the matter. A denial shall fairly meet the substance of the requested admission, and when good faith requires that a party qualify his answer or deny only a part of the matter of which an admission is requested, he shall specify so much of it as is true and qualify or deny the remainder. An answering party may not give lack of information or knowledge as a reason for failure to admit or deny unless he states that he has made reasonable inquiry and that the information known or readily obtainable by him is insufficient to enable him to admit or deny. A party who considers that a matter of which an admission has been requested presents a genuine issue for trial may not, on that ground alone, object to the request; he may, subject to the provisions of Article 1472, deny the matter or set forth reasons why he cannot admit or deny it.
B. The party who has requested the admissions may move to determine the sufficiency of the answers or objections. Unless the court determines that an objection is justified, it shall order that an answer be served. If the court determines that an answer does not comply with the requirements of this rule, it may order either that the matter is admitted or that an amended answer be served. The court may, in lieu of these orders, determine that final disposition of the request be made at a pretrial conference or at a designated time prior to trial. The provisions of Article 1469 apply to the award of expenses incurred in relation to the motion.
Acts 1976, No. 574, §1; Acts 2010, No. 682, §1, eff. Jan. 1, 2011; Acts 2016, No. 132, §1.

Art. 2642. Assertion of defenses; appeal
A. Defenses and procedural objections to an executory proceeding may be asserted either through an injunction proceeding to arrest the seizure and sale as provided in Articles 2751 through 2754, or a suspensive appeal from the order directing the issuance of the writ of seizure and sale, or both.
B. A suspensive appeal from an order directing the issuance of a writ of seizure and sale shall be taken within fifteen days of service of the notice of seizure as provided in Article 2721. The appeal is governed by the provisions of Articles 2081 through 2086, 2088 through 2122, and 2124 through 2167, except that the security therefor shall be for an amount exceeding by one-half the balance due on the debt secured by the mortgage or privilege sought to be enforced, including principal, interest to date of the order of appeal, and attorney fees, but exclusive of court costs.
Amended by Acts 1964, No. 4, §1; Acts 2016, No. 132, §1.

CHAPTER 4. EXECUTION OF WRIT OF SEIZURE AND SALE
Art. 2721. Seizure of property; notice
A. The sheriff shall seize the property affected by the mortgage, security agreement, or privilege immediately upon receiving the writ of seizure and sale.
B. The sheriff shall serve upon the defendant a written notice of the seizure of the property. Such notice of seizure shall be accomplished by personal service or domiciliary service. The notice of seizure shall reproduce in full the provisions of Article 2642 and include information concerning the availability of housing counseling services, as well as the time, date, and place of the sheriff’s sale, in accordance with the form provided in R.S. 13:3852(B).
C. Since secured collateral subject to a security interest under Chapter 9 of the Louisiana Commercial Laws need only be reasonably described in the debtor’s security agreement, the sheriff shall have no liability to the debtor or to any third party for wrongful or improper seizure of the debtor’s or third party’s property of the same general type as described in the debtor’s security agreement. If necessary, the sheriff shall request the secured creditor to identify the property subject to the security agreement and shall act pursuant to the secured creditor’s instructions. The debtor’s and other owner’s sole remedy for the wrongful or improper seizure of the property shall be for actual losses sustained under R.S. 10:9-625 against the secured creditor on whose behalf and pursuant to whose instructions the sheriff may act.
Acts 1989, No. 137, §18, eff. Sept. 1, 1989; Acts 2001, No. 128, §17, eff. July 1, 2001; Acts 2006, No. 498, §1; Acts 2013, No. 339, §2; Acts 2016, No. 132, §1.

CHAPTER 2. INJUNCTION
Art. 3601. Injunction, grounds for issuance; preliminary injunction; temporary restraining order
A. An injunction shall be issued in cases where irreparable injury, loss, or damage may otherwise result to the applicant, or in other cases specifically provided by law; provided, however, that no court shall have jurisdiction to issue, or cause to be issued, any temporary restraining order, preliminary injunction, or permanent injunction against any state department, board, or agency, or any officer, administrator, or head thereof, or any officer of the state of Louisiana in any suit involving the expenditure of public funds under any statute or law of this state to compel the expenditure of state funds when the director of such department, board, or agency or the governor shall certify that the expenditure of such funds would have the effect of creating a deficit in the funds of said agency or be in violation of the requirements placed upon the expenditure of such funds by the legislature.
B. No court shall issue a temporary restraining order in cases where the issuance shall stay or enjoin the enforcement of a child support order when the Department of Children and Family Services is providing services, except for good cause shown by written reasons made a part of the record.
C. During the pendency of an action for an injunction the court may issue a temporary restraining order, a preliminary injunction, or both, except in cases where prohibited, in accordance with the provisions of this Chapter.
D. Except as otherwise provided by law, an application for injunctive relief shall be by petition.
E. The irreparable injury, loss, or damage enumerated in Paragraph A of this Article may result from the isolation of an individual over the age of eighteen years by any other individual, curator, or mandatary, including but not limited to violations of Civil Code Article 2995 or Code of Civil Procedure Article 4566(J).
Amended by Acts 1969, No. 34, §2; Acts 2004, No. 765, §1, eff. July 6, 2004; Acts 2016, No. 110, §2, eff. May 19, 2016.

Art. 4551. Judgment
A. In the judgment of interdiction, the court shall:
(1) Appoint a curator.
(2) Appoint an undercurator, unless an undercurator is not required by law.
(3) State that the powers of the curator commence only upon qualification.
(4) Direct the clerk of court to record the judgment in the conveyance and mortgage records of the parish where it was rendered.
(5) Set forth the name, domicile, age, and current address of the defendant.
B. In addition, a judgment of limited interdiction shall confer upon the limited curator only those powers necessitated by the interests of the limited interdict to be protected through limited interdiction and shall state that the limited interdict retains the capacity of a natural person except as expressly limited by the judgment.
C. In addition, a judgment granting or extending temporary or preliminary interdiction shall set forth the date of termination.
Acts 2000, 1st Ex. Sess., No. 25, §3, eff. July 1, 2001; Acts 2016, No. 122, §1.

Art. 4565. Undercurators
A.(1) The court shall appoint as undercurator the qualified person best able to fulfill the duties of his office. The person appointed as undercurator qualifies by taking an oath to discharge faithfully the duties of his office.
(2) At any time prior to qualification, the court may revoke the appointment for good cause and appoint another qualified person.
(3) If a person fails to qualify within ten days from his appointment or within the period specified by the court, the court on its own motion or on motion of any interested person, may revoke the appointment and appoint another qualified person. The delay allowed for qualification may be extended by the court for good cause.
B. The undercurator shall:
(1) Notify the court when the curator has failed to qualify timely for office.
(2) Have free access to the interdict and to all records relating to the interdict relevant to his office.
(3) Review all accounts and personal reports filed by the curator.
(4) Notify the court when he has reason to believe that the curator has failed to perform any duties imposed by law, including the duties to file necessary accounts and personal reports, and to maintain adequate security.
(5) Approve or disapprove any transactions that require his concurrence.
(6) Move to appoint a successor for a curator who becomes disqualified or whose office terminates.
(7) Move to appoint a successor for a curator who violates any of the provisions of Article 4566.
C. The undercurator shall have no duties, either express or implied, other than those set forth in this Article and in Civil Code Article 393.
Acts 2000, 1st Ex. Sess., No. 25, §3, eff. July 1, 2001; Acts 2016, No. 110, §2, eff. May 19, 2016.

Art. 4570. Cause of action for visitation with the interdict
A. Any relative of an interdict by blood, adoption, or affinity within the third degree, or an individual who has a relationship with the interdict based on or productive of strong affection may file a rule to show cause seeking visitation, communication, or interaction with an interdict who is over the age of eighteen years.
B. Any person filing a cause of action pursuant to Paragraph A of this Article may request an expedited hearing on the cause of action, and upon showing of good cause, shall be entitled to an expedited hearing.
C. Good cause shall include but is not limited to a showing that the interdict suffers from an illness or condition because of which he is not likely to survive beyond six months.
Acts 2016, No. 110, §2, eff. May 19, 2016.