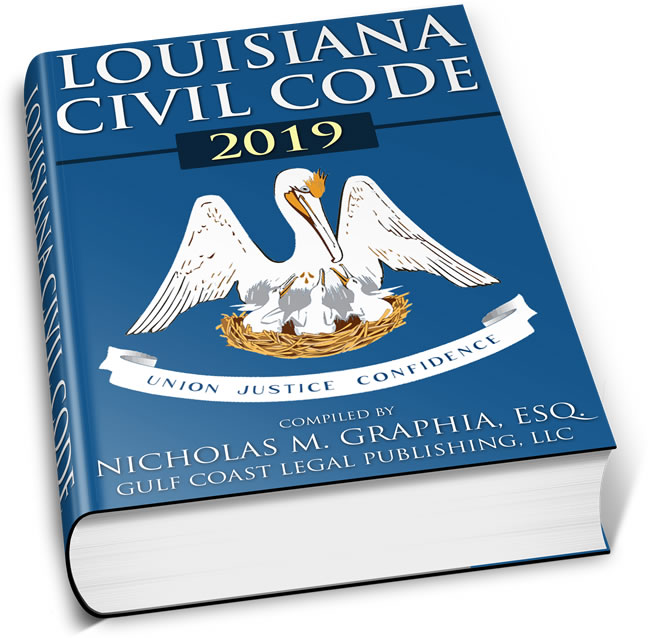 As of November 1, 2018, the Gulf Coast Legal Publishing’s 2019 Civil Code is available for purchase via Amazon and www.GulfCoastLegalPublishing.com

Art. 103. Judgment of divorce; other grounds

Except in the case of a covenant marriage, a divorce shall be granted on the petition of a spouse upon proof that:

(1) The spouses have been living separate and apart continuously for the requisite period of time, in accordance with Article 103.1, or more on the date the petition is filed.

(2) The other spouse has committed adultery.

(3) The other spouse has committed a felony and has been sentenced to death or imprisonment at hard labor.

(5) After a contradictory hearing or consent decree, a protective order or an injunction was issued during the marriage against the other spouse to protect the spouse seeking the divorce or a child of one of the spouses from abuse.

(1) The income and means of the parties, including the liquidity of such means.

(2) The financial obligations of the parties, including any interim allowance or final child support obligation.

(3) The earning capacity of the parties.

(4) The effect of custody of children upon a party’s earning capacity.

(5) The time necessary for the claimant to acquire appropriate education, training, or employment.

(6) The health and age of the parties.

(7) The duration of the marriage.

(8) The tax consequences to either or both parties.

Art. 114. Modification or termination of award of support

An award of interim spousal support or final periodic support may be modified if the circumstances of either party materially change and shall be terminated if it has become unnecessary. The subsequent remarriage of the obligor spouse shall not constitute a change of circumstance.

The obligation of interim spousal support or final periodic support is extinguished upon the remarriage of the obligee, the death of either party, or a judicial determination that the obligee has cohabited with another person of either sex in the manner of married persons.

Art. 132. Award of custody to parents

(1) The potential for the child to be abused, as defined by Children’s Code Article 603, which shall be the primary consideration.

(2) The love, affection, and other emotional ties between each party and the child.

(3) The capacity and disposition of each party to give the child love, affection, and spiritual guidance and to continue the education and rearing of the child.

(4) The capacity and disposition of each party to provide the child with food, clothing, medical care, and other material needs.

(5) The length of time the child has lived in a stable, adequate environment, and the desirability of maintaining continuity of that environment.

(6) The permanence, as a family unit, of the existing or proposed custodial home or homes.

(7) The moral fitness of each party, insofar as it affects the welfare of the child.

(8) The history of substance abuse, violence, or criminal activity of any party.

(9) The mental and physical health of each party. Evidence that an abused parent suffers from the effects of past abuse by the other parent shall not be grounds for denying that parent custody.

(10) The home, school, and community history of the child.

(11) The reasonable preference of the child, if the court deems the child to be of sufficient age to express a preference.

(12) The willingness and ability of each party to facilitate and encourage a close and continuing relationship between the child and the other party, except when objectively substantial evidence of specific abusive, reckless, or illegal conduct has caused one party to have reasonable concerns for the child’s safety or well-being while in the care of the other party.

(13) The distance between the respective residences of the parties.

(14) The responsibility for the care and rearing of the child previously exercised by each party.

(1) A grandparent if the court finds that it is in the best interest of the child.

(1) A parent’s fundamental constitutional right to make decisions concerning the care, custody, and control of their own children and the traditional presumption that a fit parent will act in the best interest of their children.

(2) The length and quality of the prior relationship between the child and the relative.

(3) Whether the child is in need of guidance, enlightenment, or tutelage which can best be provided by the relative.

(4) The preference of the child if he is determined to be of sufficient maturity to express a preference.

(5) The mental and physical health of the child and the relative.

When a person above the age of fifteen possesses less than two-thirds of the intellectual functioning of a person of the same age with average intellectual functioning, evidenced by standard testing procedures administered by competent persons or other relevant evidence acceptable to the court, the parents of such person, or the person entitled to custody or tutorship if one or both parents are dead, incapacitated, or an absent person, or if the parents are judicially separated or divorced, may, with the written concurrence of the coroner of the parish of the intellectually disabled person’s domicile, petition the court of that district to place such person under a continuing tutorship which shall not automatically end at any age but shall continue until revoked by the court of domicile. The petitioner shall not bear the coroner’s costs or fees associated with securing the coroner’s concurrence.

The decree if granted shall restrict the legal capacity of the person with an intellectual disability to that of a minor.

In addition to general and special damages, exemplary damages may be awarded upon proof that the death on which the action is based was caused by a wanton and reckless disregard for the rights and safety of the victim through an act of hazing, as defined by R.S. 17:1801, regardless of whether the defendant was prosecuted for his acts.

Art. 2362.1. Obligation incurred in an action for divorce

Art. 3463. Duration of interruption; abandonment or discontinuance of suit

An interruption of prescription resulting from the filing of a suit in a competent court and in the proper venue or from service of process within the prescriptive period continues as long as the suit is pending. Interruption is considered never to have occurred if the plaintiff abandons, voluntarily dismisses the action at any time either before the defendant has made any appearance of record or thereafter, or fails to prosecute the suit at the trial.

A settlement and subsequent dismissal of a defendant pursuant to a transaction or compromise shall not qualify as a voluntary dismissal pursuant to this Article.

The following actions are subject to a liberative prescription of three years:

(1) An action for the recovery of compensation for services rendered, including payment of salaries, wages, commissions, professional fees, fees and emoluments of public officials, freight, passage, money, lodging, and board;

(2) An action for arrearages of rent and annuities;

(5) An action to recover underpayments or overpayments of royalties from the production of minerals, provided that nothing herein applies to any payments, rent, or royalties derived from state-owned properties.